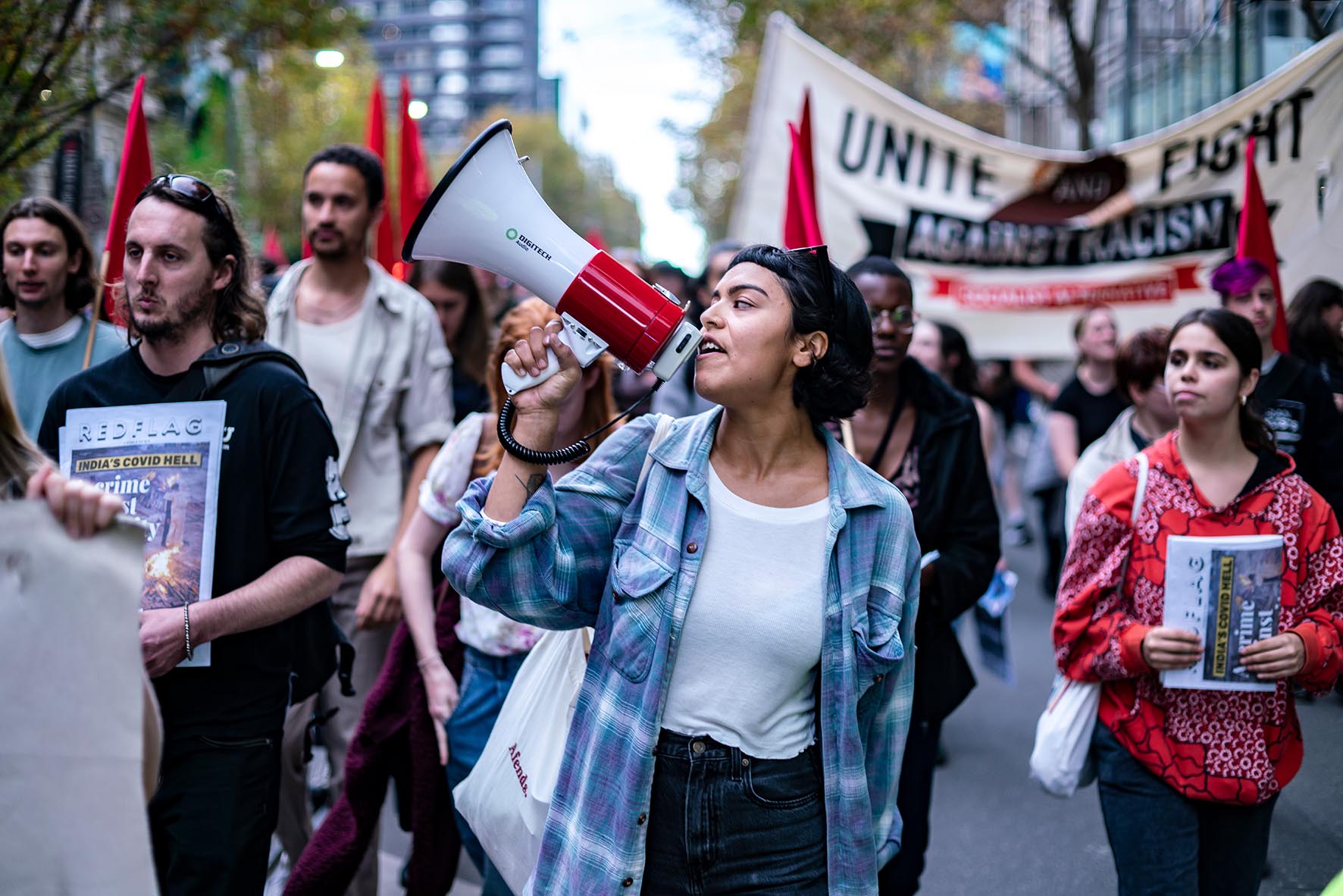 Socialist Alternative is Australia’s largest Marxist revolutionary group. We have branches in most major cities. Our goal is to overthrow capitalism, while organising to fight against oppression in the here-and-now. We’re trying to put together the basis for a revival of revolutionary working-class socialist movement. If you believe in that, or you want to learn more, you should talk to us.

Why we publish Red Flag

Australia has one of the world’s most concentrated mainstream media landscapes. Rupert Murdoch’s right-wing outlets are especially dominant, but the rest are bad too. Socialist and radical voices are largely excluded from public debate.

We produce Red Flag to provide an anticapitalist voice in Australian politics. We also want to provide an educational resource: we cover the hidden history of class struggle and the core concepts in Marxist theory. We raise awareness of international struggles, and we try to make a contribution to international debates on the socialist left. Red Flag's sister publication is our theoretical journal, the Marxist Left Review.

If you like what we’re doing, take out a digital or print subscription! It supports our project, and subscribers get some exclusive content and offers.

As Australia’s biggest revolutionary group, we believe in organising collective resistance to the injustices of capitalism.

We initiated protests of tens of thousands around Australia when Scott Morrison let Australia burn during the 2019-2020 bushfire season. We also helped found and organise Melbourne’s successful campaign of antifascist street protests, which effectively prevented Reclaim Australia and their successors from organising racist street marches in that city.

For years, we led the campaign for marriage equality, organising regular street protests culminating in the mass rallies during the successful plebiscite of 2017.

We helped tear down the fences during a mass refugee breakout from the Woomera detention centre, we initiated the night-time demonstrations against Gillard’s “Malaysia solution”, we took to the streets in solidarity with refugees in Papua New Guinea, and we’ve exposed the suffering and the heroism of refugees trapped in detention here in Australia.

Our members have organised strikes, unionisation drives, and rank-and-file rebellions in industries from warehousing to call centres to higher education. We’re Marxists, so we believe that the collective struggle of the working class is humanity’s best hope. That’s why our members are some of Australia’s most effective trade union militants.

We are also part of Australia’s most important and successful socialist electoral coalition, the Victorian Socialists, which garnered tens of thousands of votes throughout Melbourne’s northern suburbs.

We have clubs on most major university campuses. Socialist Alternative students are leading forces in Australian campus activism. When Tony Abbott tried to deregulate university fees in 2014, it was Socialist Alternative’s students who drove the nationwide campaign of protests and civil disobedience that defeated him. We organise student solidarity with striking workers, student contingents to major demonstrations, and campaigns against cuts and fee increases at a campus level. We put together left-wing coalitions to contest student union elections and challenge the conservative, pro-management approach that smothers campus political life.

Our clubs are also centres of study and debate. We organise regular public on-campus forums to discuss everything from Marxist theory to contemporary developments in world politics, as well as introductory and advanced study groups on socialist theory.

Our classes, forums and conferences

If you’re thinking about getting involved, the best place to start is with our Introduction to Marxism discussion groups. We run these every week, for free, and beginners are totally welcome. They are informal small-group discussions designed to go through the core concepts in Marxist theory: capitalism, the class struggle, revolution, socialism, oppression, imperialism, and so on.

We also organise Australia’s biggest left-wing conferences. This Easter, we're organising a national Marxism conference simultaneously in Melbourne, Sydney, Brisbane and Perth, with international speakers. Check out the website to find out about them and buy tickets. There’s also an online archive of talks delivered at those conferences.

We're always organising protests, activist workshops, public forums and socialist educational classes. Leave your details to find out about events in your city.

How to find us and get involved

If you want to find out more, you can message one of our pages, fill in this stay-in-touch form or email [email protected]. If you’re curious about socialist politics, we can help you find out more, so you can make up your own mind. If you want to get involved in activism, we can definitely help with that. If you’re already an anticapitalist, you should talk to us and see if we’re the right group for you.

We also post regular updates on our Facebook pages for our branches in Melbourne, Sydney, Perth, Wollongong, Adelaide, Canberra, and Brisbane. If you live in one of those cities you can message the appropriate page to find out how to get involved:

Our group’s origins go back to the radicalisation of the 1970s. Back then, a lot of the Australian left was influenced by Australian nationalism and patriotism, or they supported the Stalinist dictatorships in Russia or China, or they thought socialism would come through parliament – or all those things at once. A group of activists set up a small, new revolutionary socialist current based on opposing Australian nationalism, Stalinism, and reformism: they were for international workers’ revolution from below, in the classic Marxist tradition. (Here’s an interview with one of our founders.)

That group came to be known as the International Socialists. Some of our members were among its earliest founders at the beginning of the 1970s. Socialist Alternative was formed from a split in that group in the mid-1990s, when the tough times of neoliberalism provoked intense debates about how to build a revolutionary group. You can read about some of those debates here. This pamphlet explains in more detail our ideas about our group. Since we were founded in 1995, we’ve grown to become the largest socialist organisation in Australia.

What else you can read

To find out more, check out these articles and pamphlets: